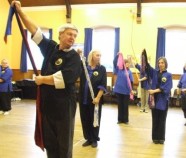 Our Teacher, Howard Gibbon is based in Scarborough, North Yorkshire and began his journey in the Lee style in 1973, training under Chee Soo.  Howard began teaching in 1976 and has been a dedicated teacher and practitioner ever since.   Howard was awarded 6th Teng Chi, and was one of only four teachers to have attained the highest grade given by Chee Soo.  Howard teaches both T'ai Chi and Feng Shou (Kung Fu) and his passion for these wonderful arts has never waned.  Howards classes and courses continue to be lively and relaxing at the same time.  Howard covers the full range of skills passed on by Chee Soo and remains focused on sharing what he has learned. Anyone meeting Howard for the first time will find an approachable and relaxed teacher who is open to questions.  He is down to earth and despite his years of expertise he remains an ordinary man, with an extraordinary skill.  You can find more info about Howard here.

Howard runs courses throughout the year, including Easter and Summer Courses, and he teaches a day course in Edinburgh twice a year.   You can find info on course dates here.

HISTORY OF THE LEE STYLE

The Lee style is a family style of T'ai Chi that originated with Ho Hsieh Lee in a small fishing village outside Beijing reportedly as far back as 1000BC (but time scales cannot be verified as is typical in an oral tradition).  The style was handed down through generations until it reached the last of the Lee family, Chan Kam Lee who was an unmarried businessman dealing in precious stones.   In 1933 Chan Kam Lee opened a class and began teaching the Lee Style in London's Red Lion Square.   In 1934 he was in Hyde Park when he was accidentally hit with a ball from a young boy playing nearby.  That boy was Chee Soo  then aged 14.   As it was still relatively unusual to meet another Chinese person in London at that time, a friendship grew between the two and Chan Kam Lee began to teach Chee Soo the Taoist Arts.  As is often the custom in Chinese culture, Chan Lee 'adopted' Chee Soo.  Under Chan Kam Lee, Chee Soo studied a broad range of arts within the Lee style including:  T'ai Chi hand form, T'ai Chi Dance, Staff, Sword, Silk, Feng Shou (Hand of the Wind Kung Fu), Chi Shu (similar to Aikido), I Fu Shou (adhering hand), Chiao Li (wrestling), Lun Pei (whirling arms), Lun Shou (whirling hands) Kai Men (Taoist yoga), Tao Yin (respiration exercises) as well as, meditation and the Taoist healing arts.  Chee Soo was also accomplished in Aikido.

You can read more on our parent site EWTA where you can also see a short video clip of Chee Soo in action.

Please get in touch if you would like a

We can provide one off or regular

sessions personalised to your needs